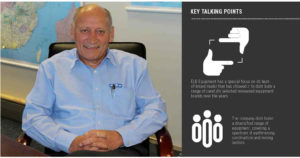 product range offered an opportunity to fully diversify into construction. It also gave us a footprint into quarries, as well as our traditional mining industry.

The next step in our growth quest was the takeover of the distribution of the Sumitomo excavator range, which was one of the big five manufacturers in the world at that stage. We then ended up with a big suite of construc- tion and earthmoving equipment, focused on smaller mines and quarries.

In our quest to further become a one-stop shop, we then looked at further diversifying into mobile crushing and screening equipment as we were already supplying quarries, small- er diamond mines and coal contractors with a range of equipment.

The third phase of diversification came in when we expanded the mobile crushing and screening range with modular and fixed type of plants. That is really where we are today. But, it is important to note that, as much as

Munesu Shoko (MS): ELB Equipment is a renowned name in the southern African equipment fraternity, well-known for its best-of- breed model that has allowed it to distribute a range of carefully-selected leading equipment brands over the years. Tell me about this approach.

Peter Blunden (PB): To get a grasp of this

model, it is important to understand where ELB Equipment comes from. ELB Equipment was founded in 1981 as part of the larger ELB Group. At that time, the whole group comprised two big companies, one was an equipment entity and the other one was a project engineering company. The equipment company was initially a well-known mining

equipment supplier, and later evolved to be a supplier of a diversified product range, mostly through opportunities that presented themselves at the time.

For example, when Leyland South Africa left the country, we inherited the Ditch Witch distributorship in South Africa, which marked our first venture into the construction type of equipment. In 1984, we further expanded by adding the Furukawa product range.

MS: So, this marked a new era as far as the diversification strategy was concerned?

– it was all about having a diverse range of top brands within our ranks. The Furukawa

opportunities to represent more brands came along, we adopted a strategy to only take globally renowned products that met our cri- teria from a quality, availability and support point of view.

MS: You have since evolved to become such a diversified equipment supplier. What are the key focus areas today? 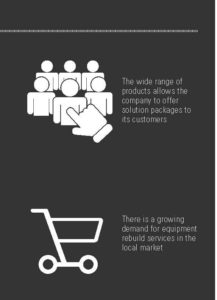 MS: What are the major advantages of having such a carefully selected and diverse range of equipment in one stable?

PB: The wide range of our product offering

allows us to offer solution packages to our customers. For example, if we are talking to

a contractor on a mine to supply crushing and screening and equipment, we also endeavour to supply them with the necessary loading equipment. We strive to be a one-stop shop for our customers’ needs. It makes it easy for them as well to deal with a single supplier for all their equipment and related support needs.

MS: Looking at the brands in your stable, most of the products are complementary in a way. But, how does the two backhoe loader brands – MST and Terex – thrive under one umbrella?

PB: The two are complementary in a way

because they cater for different market tiers. The MST is actually a more expensive and advanced product, not typically for your plant hire companies. The Terex is a simpler product for the lower end of the market.

It is also important to note that we ended up with these two products by default. When Eqstra took over the whole Terex portfolio ex- cluding the mining gear, the Terex TLB actu- ally moved from us to Eqstra. But, we needed a TLB in our stable and we took in MST at the time. After the Eqstra debacle, Terex re- offered us its TLB, but we had already start- ed selling MST, which was never meant to be a high-volume product because it’s more aimed at a different market. We eventually took Terex back. So, where we have more than one product, it’s really because of the international takeovers that have happened, not necessarily by our design.

MS: How is the uptake of some of the new technologies such as the Ditch Witch range of trenchless solutions?

contractors to spend the large amounts of money on these machines, especially when contracts are few and far between, but I believe we will reach a point where these technologies will become the standard. The market will at some point develop in South Africa. We can’t keep on standing still. Sometimes a country also needs mentality progress.

The resistance to some of these new tech- nologies is anti-progressive. It keeps workers as manual labourers instead of developing them to become machine operators and tech- nicians and give them sustainable jobs. I am of the view that sometimes promoting manual labour is the biggest enemy to skills and eco- nomic development at large.

Mechanisation allows contractors to ex- ecute jobs on time and within budget, while creating a highly productive, skilled workforce. I believe that mechanising doesn’t necessarily take people out of work. Mechanisation actu- ally creates a higher calibre of workers. It’s not something that we will change overnight, but it needs buy-in from the whole community and government at large.

MS: One of the key focus areas in recent years has been the expansion of your support network. Please tell me more about this.

PB: In the early days we used to be a

Gauteng-based company with a couple of support aftermarket branches in mining areas. But, with the type of business that we are in, which is aftermarket oriented, we have boosted our footprint over the years. It is important to understand that selling a machine is one thing but being able to support it once it is operational in the field is quite another.

Part of the strategy then became to spread the support base which we did through a combination of ELB branches and ELB deal- ers, which is still the current model that we run with. We have since grown our support network, which today is fairly representa- tive. We have branches in all major centres across South Africa, including Brits, Cape Town, East London, Kimberly, Middelburg and Durban. We also have dealers across our borders in Zimbabwe, Zambia, Lesotho, Botswana and Mozambique.

Further afield, we have recently opened a new branch in Dar es Salaam, Tanzania, which is actually an ELB Group branch. As part of our aftermarket strategy, we have also paid par- ticular attention to providing rebuild services for all the products that we supply.

MS: Speaking of rebuilds, do you see a growing need in the market for this type of service?

PB: Timing is critical. Not too long ago when

the exchange rate was still favourable, people would rather buy new. But, today there is a big focus on rebuilding and used equipment. Testimony to this is the growing base of big, thriving used equipment dealers locally. The simple reason for that is the unfavourable economic cycle and the exchange rate. We see a growing need for rebuild services as local customers see value in the second life of their pieces of equipment, especially in difficult economic times.

MS: Speaking of difficult times, how do you find the market at this stage?

PB: The market at the moment is quite

challenging. Until last year the market was shrinking, but the activity level in private construction is definitely thriving, especially in the big metropolitan areas. We have also seen a recovery in commodity prices, especially in bulk commodities such as iron ore, metallurgical coal, manganese and zinc

South Africa and southern Africa, which are our main markets, are not at their usual best despite the commodity price gains. However, we understand that it’s a cyclical market by nature. It is during this time that aftermarket becomes a big priority for us to sustain our business at higher levels.

← KAWASAKI EVOLVES ITS FAITHFUL 90Z RANGE ELB EQUIPMENT WYS TAWWE TOERUSTING BY NAMPO →
We use cookies on our website to give you the most relevant experience by remembering your preferences and repeat visits. By clicking “Accept All”, you consent to the use of ALL the cookies. However, you may visit "Cookie Settings" to provide a controlled consent.
Cookie SettingsAccept All
Manage consent

This website uses cookies to improve your experience while you navigate through the website. Out of these, the cookies that are categorized as necessary are stored on your browser as they are essential for the working of basic functionalities of the website. We also use third-party cookies that help us analyze and understand how you use this website. These cookies will be stored in your browser only with your consent. You also have the option to opt-out of these cookies. But opting out of some of these cookies may affect your browsing experience.
Necessary Always Enabled

Performance cookies are used to understand and analyze the key performance indexes of the website which helps in delivering a better user experience for the visitors.

Analytical cookies are used to understand how visitors interact with the website. These cookies help provide information on metrics the number of visitors, bounce rate, traffic source, etc.

Advertisement cookies are used to provide visitors with relevant ads and marketing campaigns. These cookies track visitors across websites and collect information to provide customized ads.

Other uncategorized cookies are those that are being analyzed and have not been classified into a category as yet.